History of the Cigar Store Indian

So as many of you have hopefully have noticed the 8 foot tall statue in the humidor, our Cigar Store Indian. Did you know know the rich history of the Cigar Store Indian statue goes back as far as 1600’s and still holds an important place for cigar shops in the US?

In the 1600’s, as ships from America began to bring tobacco to England, cigar shop owners displayed carved Indians in front of their stores as a symbol of the introduction to tobacco by Native Americans. American Indians were the original subjects for the figures, because they had, after all, introduced Christopher Columbus and his crew to tobacco.

The early carvings were made by artisans who had never seen a Native American. Therefore, the statues looked more like black men or “Virginians” with feathered headdresses wearing kilts made of tobacco. Eventually, the European tobacco shop figure began to take on a more “authentic” look. By the late 18thcentury, the statue had become completely “Indian” in the Americas.

By the 1850s, American cities were growing in size and there were more tobacco stores. This is the time when the cigar store Indian began appearing on American streets. Due to the level of illiteracy and a large non-English speaking population, shop owners used figures, emblems, and symbols to advertise their wares. Barbershops displayed the iconic barbershop red and white poles and tobaccos shops placed the wooden Indian in front of the store as an advertisement.

The Identity Of The Statue

Most of the men who carved cigar store Indians came from a shipbuilding background where they specialized in sculpting decorative wooden figureheads for a prow of a ship. Generally, the figureheads and store sculptures were from a single piece of wood. The cigar store Indian statues are often three-dimensional wooden carvings commonly made of white pine several feet tall, some life-sized and some as tall as seven feet.

The more expensive and rare metal statues were mostly made of zinc. Both metal and wood statues were hand painted. The most common types of statues are the “noble savage” (with a passive stance and stoic expression) and the “warrior” (brandishing a weapon).

Most statues held tobacco or had leaves painted on their clothing. To give the statues personality, local townspeople would give them names. For instance, in Reading, Pennsylvania, the cigar store Indian was known as Old Eagle Eye. Chief Blackhawk lived on the streets of Louisville, Kentucky. Created in 1849, Chief Semloh resided in San Francisco and lasted on the streets until the 1906 earthquake.

The Demise Of An Icon

Eventually, the cigar store Indian would lose its popularity with retailers. Around 1890, the city streets in America were becoming increasingly populated. By 1911, cities began passing obstruction laws requiring at least two feet of open space in front of each store. Later, other issues, including higher manufacturing costs of the statues, restrictions on tobacco advertising, and an increase of racial sensitivity helped lead to the demise in popularity of the iconic figures.

Today, a cigar store Indian in its’ original condition is a rare find. Tobacco shop owners began expanding their product lines and many statues were tossed. Also, many cigar stores’ Indian carvings were destroyed at scrap drives for metal and wood during World War I and World War II. Viewed as folk art, those that still exist tend to be in museum collections or in private hands.

These days the best of the wooden cigar store Indian sculptures can sell for as much as $100,000. A rare five-foot cigar store Indian figure with original paint and beautifully carved in the 1880s by the renowned artisan Samuel Robb, sold for $94,400 at auction in 2012. Regardless, the Cigar Store Indian has a permanent position in the history of cigars and cigar shops, like ours at Cigar and Tabac Ltd. 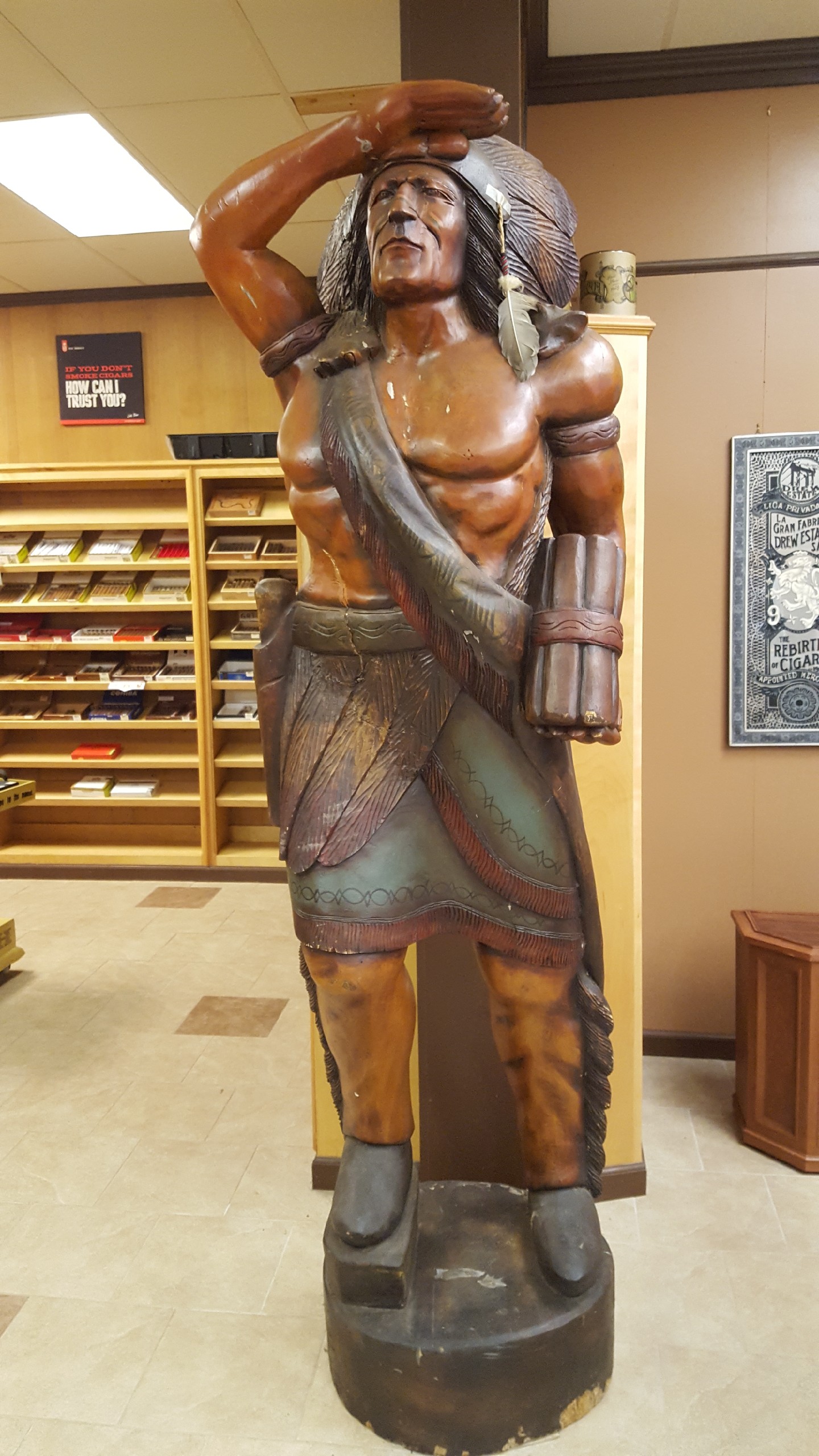