Trinidad Espiritu is new to Cigar and Tabac ltd 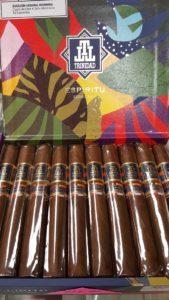 Add Trinidad to the list of classic brands AJ Fernandez has developed blends for. Today Altadis U.S.A. announced it is once again partnering with Fernandez, this time on the Trinidad Espiritu. It’s a release that coincides with the 50th anniversary of the Trinidad brand and also celebrates vintage Caribbean culture.

“The original Trinidad cigar brand was used exclusively for dignitaries and diplomats as gifts,” explains Brad Winstead, Altadis’ head of consumer marketing in a press release. “Fifty years later, we’re celebrating the venerable brand’s half-century anniversary by taking adult smokers back to the late 60s-early 70s era — which many consider the “Golden Years” of cigars.”  And now we have them.